Looking Beyond the Ferris Wheel: ‘Search Engine for her Future Self’ 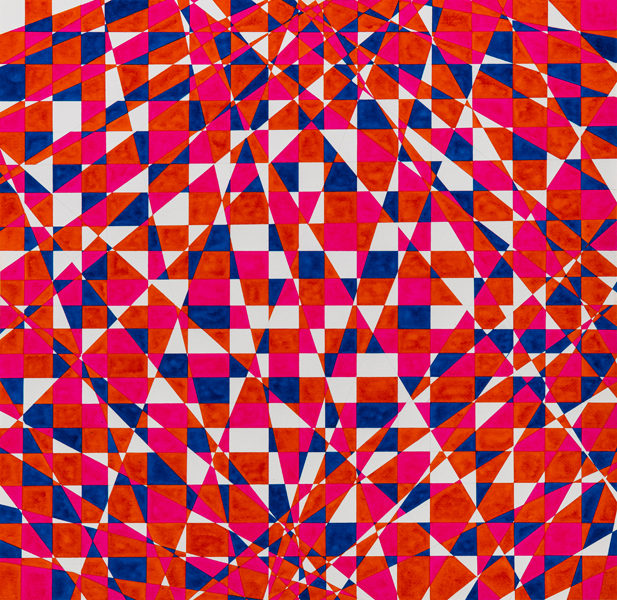 “She went to buy a ticket at the booth in front of the Ferris wheel.‘We’ll be closing pretty soon, Mademoiselle,’ the ticket seller,
an old man, told her…. This will be the last ride. One time around and we’re finished.”

[…] ‘That’s all right. Once is enough,’ Miu replied. She brought a ticket and stepped up on the platform…. Empty boxes swung
idly through the air as they revolved as if the world itself were fizzling out towards its end.”[i]

As the artist sat at the window she was visited by her future self. The machine winds down and comes to a complete halt. There is silence. Then there is a pitch, a sound measuring the frequency of vibrations from one dimension unto another. There is a portal. Later there comes a painting. Existing on a two-dimensional plane is carbon from a pencil, pigment from paint. These works spin: rocking our physical world, orientating a higher plane of existence on a piece of watercolour paper.

The central character in the passage quoted above, from Murakami’s Sputnik Sweetheart, gets trapped on a Ferris wheel. One can visualize a gondola swaying on its suspension to a large radial structure. Like so many of Murakami’s novels the moment precipitates a transcendence in space-time. Seated from within the gondola—now become an observation capsule—Miu gazes across the city toward the apartment in which she lives. Gazing in through its windows, with the aid of a pair of binoculars, she sees herself in the bedroom. How can she be in two places at one and the same time? Both within the gondola capsule and across the other side?

The Ferris wheel is an apt mechanism in parallel to the work of Kathy Barry, represented here in her 12 watercolours collectively titled ‘Search Engine for her Future Self.’ A Ferris wheel starts up, rocks slightly forward-and-back on its axle, then revs up, reaching its zenith through ascending gears to revolve at full velocity. Designed to excite the human occupant, the Wheel alters gravity’s experience. We feel the lurch in our innards. Ferris amusements thrill us, make us giddy on exhilarating loops, then return us to the place we boarded. As with other apparatuses discovered in his novels, for Murakami the Ferris wheel becomes a portal to another spatial-temporal plane. Miu sees not herself across the city, but her future self, come to visit as portent.

Peering through the picture glass to the orbiting colours of Kathy Barry’s work—scanning the labyrinthine of electric blues, hot pinks, burnt orange and emerald greens—easily belies the efforts gone into their production. Hundreds of hours of labour equates to hundreds of elongated rectangles, trapezoids, and triangles of various sizes. Each is as a capsule travelling on intersecting radial lines, suspended like good exhilarating drugs for the taking.

Perhaps the account of the works’ aesthetics ought to be slowed down, and, akin to a Ferris wheel turning at speed, braked to descend through gears and come back down to earth, for pause and momentary halt. To settle our equilibrium before we start the second ride, and climb toward an apex of the great spinning disk.

The works’ geometries lift off again, and conversely worm-down deep into the two-dimensional plane, a multi-dimensional network going way beyond the paper surface, the frames, the glass, and the room they’re in. These watercolours record unseen transmissions from the natural world that resides outside of the narrowband of human perception. As frequency diagrams they work their effect on us to bridge an energetic relationship with our consciousness.[i] What appear outwardly such visible and precise optical diagrams do not immediately yield the secrets that their abstract geometries hold—energies that remain, ironically, completely invisible to the eye. Said this way: ‘it is not things in themselves that are important but the transcendental dimensions beyond them.’[ii]

As a transcendental and restorative practice, there is correspondence to a pioneering form of abstract art produced in the early twentieth century, in part based on scientific and technological innovations, though an artform arrived at through methods not bound by rational science, and understood today as paradigm shifting.[iii] The further the time spent onboard with a series of Kathy Barry’s work, the more telling the powerful influence their symbols exert and represent. That is to suggest the watercolours hold a mystical agency, attained via the subtle universal energies that intertwine the corporeal, whereby their efficacy is itself a form of being. A form of ritual lies behind these paintings. They exist as a passage from her future self, leaving behind an encoded intelligence, a complex visual representation as a means for others to navigate.

As artists before her in the history of even just this world, the propositions in Kathy Barry’s practice wager no conceit, no conspiracy theory, no la la crazy land. Aligning the discussion in our current era of quantum mechanics—the nature of particles that make up matter and the forces with which they interact—this Earth’s based scientific community now list 26 dimensions—her work cannot be taken at all lightly.

Taking the reader to the text’s close, here is another spinning wheel: photographic evidence of the Event Horizon, a warp on the radial precipice of the supermassive black hole in Galaxy Messier 87.[iv] Existing just 55 million light years away from Earth, the lurch of gravity is so strong out there that nothing emits from within, the velocity required would be equal to the speed of light. And so that a ‘lay’ person can actually make out the whirl in the infinite reaches of space, the image is slightly adjusted—a heightening of the curvature about an orange fiery glow.

Making out the depths of her painted surface there is something beyond at work. Quite seriously, quite possibly, a greater good.

[ii] Anna Maria Bernitz writing on the pioneering contribution of Hilma af Klint to abstract art. ‘Hilma af Klint and the New Art of Seeing’ in A Cultural History of the Avant-Garde in the Nordic Countries 1900-1925. Journal of Avant-Garde Critical Studies (Vol. 28, 2012): 587-597.

[iii] Kathy Barry has longstanding interests in the work of Hilma af Klint (1862-1944) the Swedish spiritual and mystic painter, and Emma Kunz (1892-1963) Swizz healer and artist. Kunz and af Klint received little attention when alive, indeed the latter entrusted her works to her nephew instructing they were not to be shown until twenty years after her death. Their delayed critical reception is evident in exhibitions such as the 2018 retrospective Hilma af Klint: Paintings for the Future at New York’s Guggenheim (which drew huge audiences); and Switzerland’s Aargauer Kunsthaus is presenting The Universe of Emma Kunz from 23 January 2021 to 24 May 2021. According to de Zegher, the artists’ pioneering methods to geometric abstraction was ‘not as formalism, but as a means of structuring philosophical, scientific, and spiritual ideas …crea[ting] diagrammatic drawings of their exploration of complex belief systems and restorative practices.’ See 3 x Abstraction (London: Yale University Press, 2005). p. 29.